Nameplate from the stern of the 1st Class Torpedo Boat HMVS Childers.
photographed courtesy of the Museum of HMAS Cerberus.

FROM OUR OWN CORRESPONDENT

The torpedo boat is the most interesting of the three vessels, although it is by far the smallest. Every nook and cranny of it contains some novel device for economising space. The following technical description of the Childers, is taken from Engineering, of 28th December:- Length on water-line, 113ft.; beam (moulded), 12ft. 6in.;depth, 6ft. 6in.; draft forward, 2ft. 6in.; aft. 6 ft.; displacement, 60 tons, The hull is built of galvanised Bessemer steel, and is divided into 11 compartments by eight water-tight bulkheads and two half bulkheads, in the manner introduced by Mr. Donaldson. The boat will float with any one of these compartments filled. Six powerful bilge ejectors are fitted. Two of these are placed in the boiler compartment, and are capable of ejecting 40 tons of water per hour each with a boiler pressure of 75 lbs. In addition to the ejectors, a bilge pump is worked off the main engines, and hand pumps are fitted for pumping the bilge from on deck. A seperate steam donkey is provided, and the circulating pump, which is arranged with suction branches both in the boiler and engine rooms, as well as from the sea, is guaranteed to throw 45 tons water per hour. 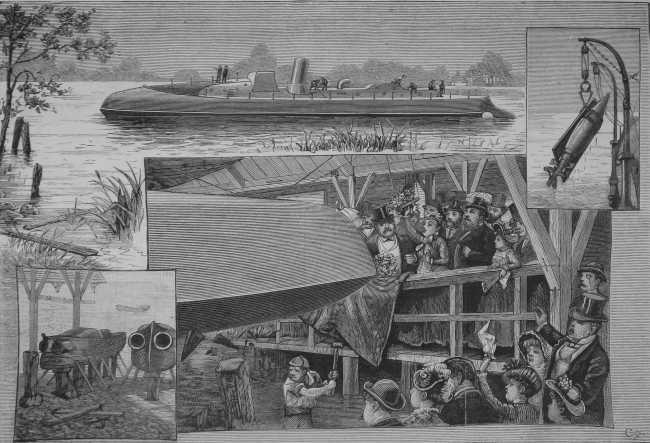 Shown in the collage is Childers and its launching & a torpedo being retrieved after practise.
The boats at bottom left were being built for the Italian government.
photo from Illustrated Australian News, 10 Nov 1883.


The main engines are 14½ in. and 24¼ in. in diameter, by 15in. stroke, and were guaranteed to develop 750 indicated horse-power. They are of the now well-known Thornycroft type of torpedo-boat engines; they are fiitted with a special valve by which they can be converted into non-condensing engines if necessary. Auxiliary engines are used for driving the fanblower and for the circulating pump, in adddition to which there is the steam donkey referred to; the former are placed in the engine compartment,and the donkey in the boiler-room, but both fan and donkey can be regulated from either compartment. A striking feature is the steam-steering gear, which is fitted in the forward part of the conning tower.

The boat can be steered either by steam or hand in the conning tower, or by hand by means of the wheel further aft. In the forward compartment is a Brotherhood air-compressing pump, the engine and pump being self contained on one base-plate. By this machine air is compressed to 1,500 lb. to the square inch for the purposes of charging the torpedoes and ejecting them from the impulse tubes.

In the forward compartment is also the electric light machinery, consisting of a Brotherhood engine and an M. Gamme dynamo. A Mangin projector is used, by the aid of which objects are rendered visible at a distance of 1¼ to 1¾ miles. The boiler is of the usual Thornycroft torpedo-boat type. The total heating surface is 1,119 square feet, of which 1,032 square feet is supplied by the tubes, and 87 square feet is contained in the firebox. The grate area is 30 square feet; the area of tube section is 4.74 square feet. It will be seen that in this small vessel of only about 60 tons displacement there is no less than seven seperate steam engines, and the main engines alone are guaranteed to indicate 12½ horse power per ton of displacement on full power runs.

The propeller is one of thornycroft's patent: it has three blades, and is made of forged steel. The diameter is 5ft. 7in. and the pitch 5ft 9in.; the end of one blade is considerably out of the water when the vessel is at rest, but even at a very slow speed the boat settles sufficiently by the stern to immerse the screw immediately on the engines being started ahead.

The vessel lies low in the water, and has a remarkably neat and trim appearance. There is a turtle-back deck forward, at the after end of which is a conning tower, giving considerabe protection to anyone within its cover, and containing the apparatus for firing torpedoes. A rudder is placed at the bows, which can be worked in conjunction with that at the stern. The armament of the Childers consists of four Whitehead torpedoes, and two small Hotchkiss machine guns, which somewhat resemble the Gatling guns. The torpedoes are 19in. in length, 15in. beam, and they cost about £100 each. When not in use they are stowed in the after part of the boat. They are fired by means of compressed air, and in the act of being shot a spring is released by which the torpedoe is enabled to work its own passage. When in the water it travels at the rate of 21 miles an hour for a distance of 2,500ft. The charge of gun-cotton for a torpedo of this class is 94½ lb.

The speed attained by the Childers is about 20 knots an hour. She exceeded this rate on the trial trip. It may be added that there is only one other boat like her in the world. It belongs to the Russian Government and is a twin vessel to the Childers.

ON BOARD THE CHILDERS, PREPARING TO DISCHARGE A TORPEDO. 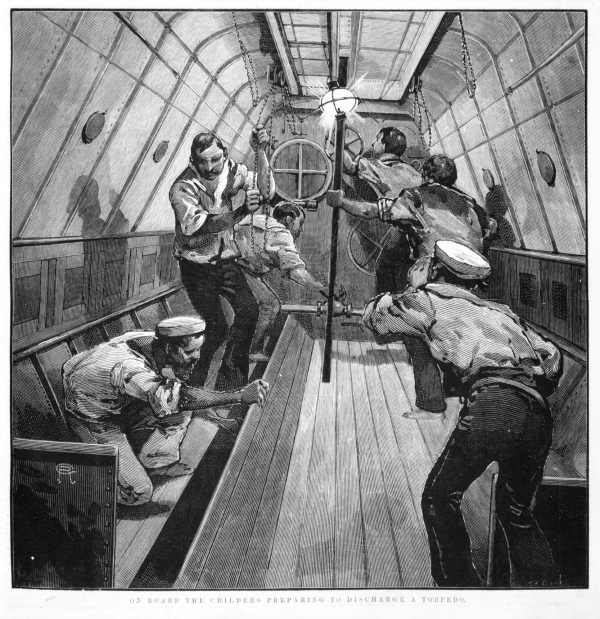 Shows interior of the boat, with 2 sailors retrieving a Whitehead torpedo from under the flooring. Another sailor is opening one of the 2 bow torpedo tubes.

She is constructed entirely of steel & has a speed of between 21 and 22 knots per hour, & the torpedoes, of which she carries four, are known as Whiteheads, & are stored away on either side of the keel, being hidden from view by the flooring. On going into action they are lifted out & placed in the pneumatic tubes which are on either side of the stern (sic) & the door is then closed & the plate which covers the mouth of the tube when not in use to prevent the sea pouring in is lifted by turning the wheel at the far end of the sketch. The torpedo is then fired out of the tube by compressed air, & at the same time an automatic contrivance sets the machinery of the torpedo itself which is also driven by compressed air, in motion, & propels it at a tremendous speed towards the vessel to be attacked.

Image courtesy of The State Library of Victoria - Pictures Collection. 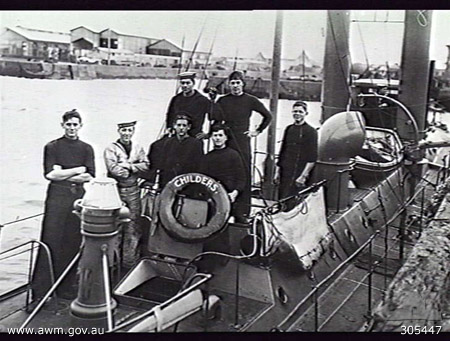