The inhabitants of St. Kilda were considerably startled yesterday afternoon by the advent of an unwelcome stranger, in the shape of a large shell, which appears to have been unwittingly discharged from H.M.S. Wolverine. The missile first struck the fence of Mr. Stone’s premises, in Patterson Street, and thence passed through his workshop, within a very short distance of Mr. Stone, who was engaged there at the time, damaging in its transit the pipes of a new organ, which he is building. After passing over two houses it alighted on the cabstand, near the St. Kilda railway station, whence it scattered fragments of road metal on to the roof of Wimpole’s Hotel, a distance of about 100 yards, and finally spent itself against Mr. Dare’s house, making a hole in the eighteen inch wall, of about eight inches in diameter. As the shot passed over Fitzroy Street at an elevation of about five feet, it may be considered most providential that no persons were passing at the time, as had it happened, just after the arrival of the train the consequences might have been disastrous. Sir G Brown & Governor Weld may be considered to have had a narrow escape, as they passed the spot shortly before or after the occurrences. The shell, which weighs about 100 pounds, being 21 inches in height and 8 inches in diameter, was picked up by Mr. A. C Armstrong, who intends exhibiting it today in Bourke St.

THE DANGERS OF SHOT AND SHELL PRACTICE

TO THE EDITOR OF THE ARGUS

This afternoon about 3pm, a solid conical shot (weighing, at a guess, a hundred weight) came whizzing into St. Kilda, and as I have taken some trouble to investigate the course and direction traversed by this projectile and the damage done, I here with give you the particulars, trusting that you will use your influence to prevent any chance of further visitors from the guns of Nelson. The shot first struck the sand not far from the water’s edge, then crashed through some palings, and taking an upward direction went clean through Mr. Stone’s organ workshop, and just missed the roof of a house close by; it afterwards again struck the earth on the flat, nearly killing a Chinaman; again bounding up, it next visited terra firma outside the door of the St. Kilda railway station, frightening a cab horse, who bolted. Glancing upwards once more, it crossed Fitzroy street, narrowly missing some lady friends of mine, who were covered with dust and stones raised by the ground being struck as before mentioned. Passing over Mr. Thomas Taylor’s palings, it finally struck Mr. Dare’s house of business in Grey Street, and being spent, rebounded on to the waste ground adjoining. The shot is now to be seen at the George Hotel, and a formidable thing it is. It is a little less than a miracle that no lives have been lost and that so little damage has been done, and the manner in which several houses and people in direct line have escaped through the eccentric ricochets could not fail to surprise greatly any one who investigates the matter. I think that the real wonder is, considering the continual firing shorewards at short distance, that there should so seldom, if ever, be an event of this kind to report.

It appears that the shell that paid such an unexpected visit to St.Kilda on Friday last, was fired from the Nelson, and obtained its direction in a very extraordinary manner. It was fired from a gun with a 24lb. charge of powder, at a target set up in the Bay, but it fell short, and, striking the water, ricocheted at a tangent and passed over to St. Kilda. The man who laid the gun was an experienced gunner, a recent arrival from England, and the eccentric flight of the projectile cannot be accounted for except by the supposition that the elevation of the piece must have been radically wrong.

Captain Mandeville, the officer commanding the naval forces, had under consideration yesterday the necessity of appointing a board to inquire into the circumstances under which a shell was fired from the Nelson during the drill of the Naval Reserve on Friday last. It appears that the shell was an unfilled one, and was fired from one of the bow guns towards the target which was fixed in the direction of Brighton. These guns are old 68 pounder smooth bores converted into rifled guns. It is considered a most extraordinary circumstance that the shell should have become so deflected to the left as to reach St. Kilda. Rifled guns, as a rule, always deflect to the right, and the shell apparently took the usual course after it first struck the sand on the beach. The subject was brought under the notice of the St. Kilda Council last evening by Councillor Wimpole, who was desirous of having an official letter sent to the Chief Secretary, pointing out the danger likely to arise, and the damage already done by the shell being thrown into the borough. The members of the council were, however, of the opinion that it was the duty of the party aggrieved, or his agent, to take the necessary steps to bring the matter under the notice of the Government. Accordingly, no official action was taken by the council. 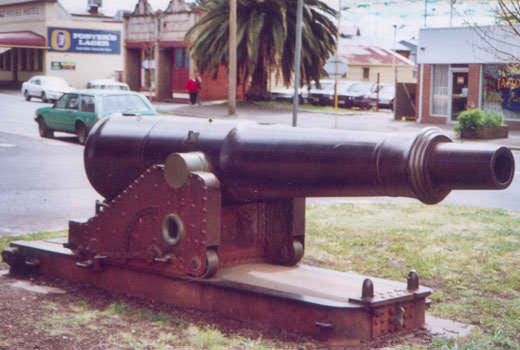 One of the two bow chaser guns from HMVS Nelson,
photographed in 2004 at Eaglehawk, Vic.


An article written by J. S. Frazer that appeared in The Argus on 9 January 1932 appears to be the source of the myth that Cerberus bombarded St Kilda. This was rebutted on 23 January.

"Dare's shop in Grey street abuts on this empty block, and if we look closely at the northern wall we may see the mark made by the cannon ball fired by the Cerberus while at target practice off Williamstown. The sighting must have been extraordinarily bad."

M.L. (St. Kilda) writes :— "In his interesting article on old St. Kilda, which appeared on January 9, Mr. J. S. Frazer is inaccurate in attributing the hole made in the wall of Dare's office in Grey street to unskilful target shooting by the Cerberus. The facts are that the mishap occurred on a Queen's Birthday. During a cartridge salute from the old Nelson a live cartridge was inadvertently fired. The shell went through an organ in process of construction in the late Mr. Stone's workshop. The cannon ball then landed in the middle of the "black swamp" — and ricochetted (sic) on to the wall."

"I was on board the Nelson until after 12 o'clock and on leaving did not think for one moment that the rifled guns would be used for shell practice. I read about it in the press, and called for a report from Captain Fullarton of the Naval Brigade and Messers Richards and Groves." Captain Mandeville

"After finishing shell practice with the 32 pounder guns at 1100 yards. I sent the gun crew to drill on the 7" rifled gun and, as I had a clear range of about 6000 yards and the gun had not been fired for 2-3 years, I thought it would be a good idea to fire a few rounds of filled shell at short range.

The first was an unfilled shell which pitched over the target and then to the best of my belief, sunk expended. The other shells were filled, with 14 pound charges, all of which burst short of the target flag at which we were firing. The line of fire was between Point Ormond and St Kilda.

To land where claimed, the shell would have had to deflect 1500 yards to the left of the target. An experienced gunner was in charge and the practice was observed by the officers of the Naval Reserve." Captain Fullarton

The two gunner instructors reported that 3 empty and 7 filled shells were fired from the 7" revolving gun.

"We were not responsible for setting the targets in the direction of St Kilda, and we beg to state that Captain Fullarton of the naval reserve conducted the whole days practice with reference to laying out the targets and firing the guns signed O. Richards & Robert Groves."

"Allow me to call your attention to the fact that a large shell which was fired from one of the vessels in the Bay yesterday afternoon passed through the fences of my premisis and then, after rebounding from the ground, burst through a workshop in which I have a large organ in the course of erection, just above the framing of which, it passed, scattering splinters in all directions and damaging some of the [organ] pipes.

May I request you will use your influence to prevent a similar reccurance which, but for our absence from work, might have been attended with serious results as my son and I would have been at work on a plank almost in a direct line of the shell's passage.

May I also request that you will inform me to whom I am to apply for cost of damage to my property which I estimate at between £10 and £12. Yours respectfully William Stone.

P.S. May I also call your attention to an anomally in the present tariff - that whilst keyboards for pianos are admitted free of duty, keyboards for organs are charged with 20%, thus placing us at a disadvantage."

"The Hon the Treasurer
Sir,
On Friday last during the time the Naval Brigade were at practice on board the Nelson, an unexploded shell struck a property in Grey St St Kilda, pierced a hole through the brick wall and damaged the interior.

I have refrained from writing sooner, thinking that an accident of this nature, so fraught with danger to life and limb, would have been the subject of an enquiry by the proper authority, but as no notice seems to have been taken and as great inconvenience is caused to the tenant Mr F. Wimpole, I beg to request that you will give instructions to have the necessary repairs executed promptly.

I have instructed Mr Sydney W. Smith, architect, to attend to the matter on my behalf."

Ada reported that "a small percentage of the cost of the repair to Mr Wimpole's house, and Mr Stone's organ and workshop was paid several months later."