How to Help Save the Cerberus.

URGENT as of 18 July 2018. Heritage Victoria Approves the Filling of Cerberus with 4,000 tonnes of Concrete.

Did Heritage Victoria read our Submission?

They can't have, as their reasons for rejecting polyurethane are contradicted by the facts.

Heritage Victoria rejected polyurethane as "This option was not supported based on cost, environmental risk, and that polyurethane foam has not previously been tested on ship wrecks or similar contexts." 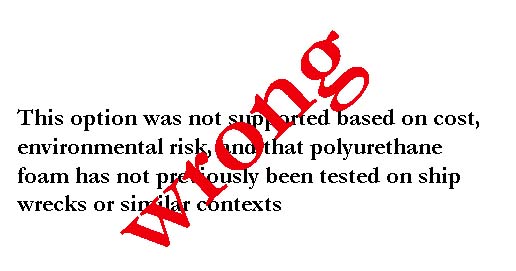 Our submission pointed out that:-

Clearly Heritage Victoria has not kept an open mind, or even read our submission,

What can Supporters Do?

At this stage we suggest that supporters might like to write polite letters to the editors of The Sun, The Age, The Australian and The Bayside Leader newspapers pointing out the stupidity of concrete fill as opposed to the use of polyurethane. We cannot emphasise enough, that until over 200 concrete trucks are driving towards Half Moon Bay, the battle is not lost.

We believe that for letters to be considered for publication, they must have a name, street address and phone number so their authenticity can be checked. An email address is not sufficient.

Letters to The Age Newspaper

Letters to The Sun Newspaper

Letters to The Australian Newspaper

Letters to The Bayside Leader


Our Case that was Rejected by Heritage Victoria

Simply copy and paste basic html code to add the Cerberus News Ticker to any webpage.