We give an illustration of the Victoria, one of the recent additions to the Victorian fleet, as seen while she was in the Alfred Graving Dock for purposes of scraping, painting, and effecting necessary repairs. The Victoia was taken into the dock at the same time as the Cerberus, the latter being at the head of the dock, and the gunboat near the entrance. The view we give was taken looking towards the caisson from about half-way down the dock. During the stay of the Victoria in the dock she was visited by a large number of people, who took interest in inspecting this, the larger of the two gunboats recently brought out to join our fleet. Her big 25-ton, or l0 inch breech-loading gun, 27ft. 8in. in length, situated, in her bows, naturally was viewed with great attention and interest. The maximum charge for this enormous weapon is 230lb. of powder, but 170lb. is the normal full charge. The weight of the projectile is 4001b. The range of the gun is 10,000 yards, while its projectile will penetrate 20½ inches of wrought iron armour at 400 yards with a Palliser chilled shot. The firing may be done by tube or by electricity. The captain of the gun stands protected by a square compartment of steel called the "conning tower," and takes his sight through narrow niches left for the purpose. The gun is worked by nine men. In the stern of the vessel are two 12-pounders, which are an exact copy of the larger gun. The range is 6,000 yards, and their use is principally to attack boats or repel torpedo attacks; as they have very low penetration they may also be used as field guns. There are two Nordenfelt guns, with four barrels each. 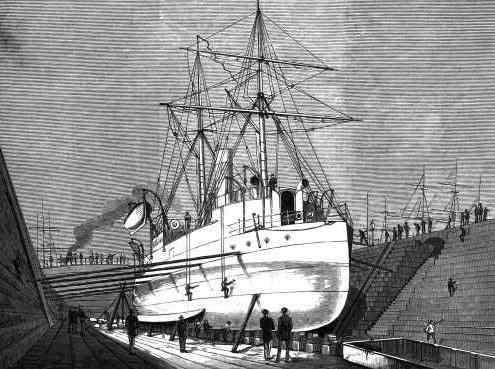 
TRIAL TRIP OF THE FAWKNER 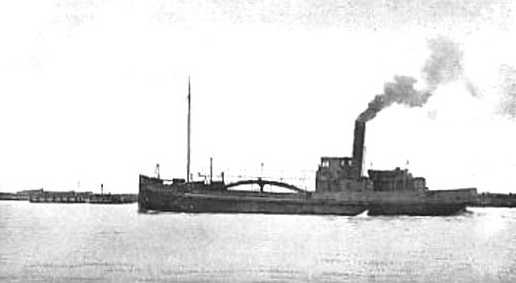 The steam hopper barge Fawkner, one of two boats built at Glasgow to the order of the Melbourne Harbour Trust - and strengthened in the bow at the suggestion of the Minister of Defence, so as to fit her for carrying a six-inch breech loading gun, of the type recently introduced for the protection of the harbour - made her trial trip in the bay on Saturday.

The steamer left Sandridge railway pier at a quarter to 11a.m., having on board a numerous company of gentlemen interested in the results of the experimental tests it was proposed to make, among them being, Alderman Moubray (chairman of the Trust), Lieut-Colonel Sargood (Minister ofDefence), Colonel Disney (commandant), Captain Manderville, Lieut-Colonel J.M.Templeton (Defence Board), Major turner (commanding officer of the field artillery), Captain Fullarton (harbour master), Mr. C.Smith (mayor of Melbourne), Mr. Wallace, M.L.A. Commissioners, Marshall, Couch, Lorimer, Huddart, O'Grady, Loader, Blyth, and Dowman. Mr. Mouritz (secretary to the Trust), Mr. Brady(resident engineer to the Trust), Mr. McLean (assistant engineer), Councillors Amos, Zevenloom and Wilkes. In charge of Captain Richardson, (formerly of the Harbour Trust's steam tug Pelican and of their steam launch Commissioner), the Fawkner went under ordinary steam to the lightship, which she rounded, and then steered for Brighton Point.

Off Brighton a stoppage was made for the purpose of exhibiting the method of working the machinery used for dropping the silt or mud with which the Fawkner will be loaded by the dredges. This operation was watched with much interest and proved thoroughly successful, the dredgings being deposited and the doors reclosed without a single hitch. The water was smooth as the surface of a duck-pond, a circumstance highly favourable to a critical survey of the experiments. While off Brighton Captain Fullarton directed several manoeuvers, with a view to testing the speed and steering capacities of the boat, and expressed himself highly gratified with her behaviour, especially the smartness with which she answers her helm, a complete circle being described in 3 min. 25 sec. Her ordinary speed is between eight and nine knots an hour, with the engine making about 70 revolutions per minute, and by putting on a spurt she can make ten knots hourly.

It is said she will tow two 500-ton barges at the rate of six knots, and one of that burthen at seven and a half knots an hour. Her boilers and engines are very compact. The engines worked well, being cased, stopped, and the vessel sent full speed astern in 1 min. 5 secs. In every respect the trials were considered very satisfactory, the vessel being handy, steaming well, and steering admirably. In the course of the trip the visitors assembled under an awning over the forecastle, and several complimentary speeches were delivered; "Success to the Fawkner," "The Minister of Defence." "The Chairman of the Harbour Trust," and "The Commandant," being toasted with great cordiality and appropriately acknowledged. Colonel Disney remarking that it was his constant and earnest endeavour to bring the defence force on land to a condition of thorough efficency, worthy of the colony.

It was mentioned that the Fawkner cost £12,000, and that an additional expenditure (probably amounting to £1,300) which will be defrayed by the Government) has been incurred in qualifying her to act as part of the naval defence.

Her passage out occupied 80 days, including 16 days in ports en voyage, so that she was under steam only 64 days. In the course of his observations in replying to the toast of his health, Colonel Sargood stated that in a very few months two gun-boats and three torpedo boats will be out, and when these were added to the Cerberus, Victoria would have a fleet which, he thought, we might safely look upon as all that is required to defend the port of Melbourne from hostile attack. He should arrange for a naval review on a small scale as soon as possible after the arrival of the boats he had named, and he hoped that the two armed barges of the Harbour Trust would turn out fully equipped and form part of a flotilla. (Applause) The Fawkner reached Sandridge pier shortly after 12.30, and the company returned to town by train. The Argus, 24 March 1884 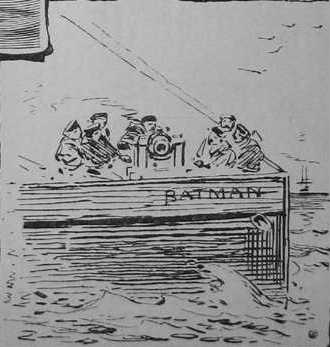 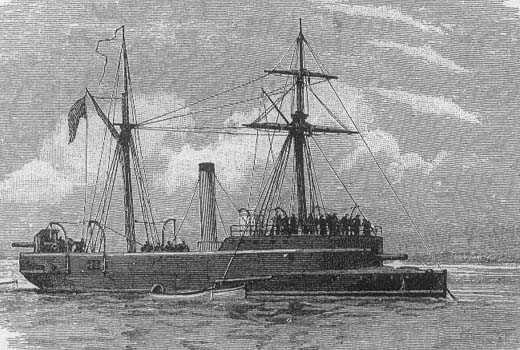 This vessel is a little smaller than the Victoria, but in general constructon she is exactly similar to the latter. She has a company composed of four officers and 31 men. Her dimensions are Length 120ft., Length along waterline 115 ft., beam 25ft. She draws 9ft. 6in. of water, and her displacement is 470 tons. The engines are like those of the Victoria. The diameter of the high - pressure cylinders is 17 in, and of the low - pressure cylinders 26 in. The length of the stroke is 1ft. 3 in., giving a mean indicated horse-power of nearly 400. The mean pressure on the starboard high-pressure cylinders is 39.4lb, and on the low 16.75lb., that on the port-side high-pressure cylinder is 37.83lb., and on the low 15.34 lb. A speed of 10.18 knots was obtained at the trial trip. The boilers, furnaces and propeller are a little smaller than those of the Victoria, and all have worked splendidly on the voyage out. In the bows of the Albert is an 8in. x 12½ ton gun, capable of being turned 15 degrees in each bow. It is 19ft. 3 in. long, and the maximum charge is 100lb.of powder, the smaller 65lb. of pebble powder. The projectile,which weighs on an average 180lb., is capable of penertrating wrought iron armor 14½ in. thick. In other respects the weapon is similar to the 25 ton gun on board the Victoria. In the stern is a four ton or 6in. gun mounted on a pivot. It is exactly of the same construction as the gun in the bows, but it can be turned around to any point. It is 14ft. 7in. long. The average weight of the projectile is 70lb. and the maximum charge is 42lb. of powder. The projectile can be fired through 11½ inches of unbacked wrought iron armor. The Albert has also two nine-pounders mounted on her beam, each weighing 5 cwt. The weight of the projectile is 9 lb., and the charge is 2½ lb. of rifle grain powder. Two Nordenfeldt guns similar to those on board the Victoria will be carried. 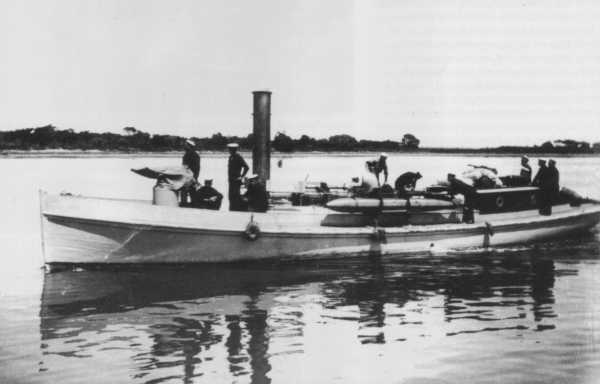 The torpedo launch for the Defence departmeut shipped from England on the s s Angerton which arrived at Adelaide on Monday, is expected to prove a valuable addition to the naval defences of the colony. The launch is of the class known as White's turnabout double rudder pinnace, and is designed with a view to secure the highest turning power. The boat is 56ft long, 9ft 6in. wide, and 5ft in depth. She is fitted with engines of 150 indicated horse power and the total weight of hull and machinery is 9½ tons. The vessel on her trial attained a mean speed of 14.98 knots per hour and while travelling at that rate turned completely within a length and a half. She will be furnished with spar torpedoes and dropping gear and Nordenfelt one inch guns with shield, and may be used for ordinary launch work. The Argus, 10 February 1886

A preliminary trial of the new torpedo boat Gordon took place yesterday. The Gordon arrived by the steamer Angerton about a month ago, and she is the first of her type turn about or picket boats introduced into the colony. The dimensions of the boat are 56ft by 10ft, and she possesses a double rudder, and is capable of turning in twice her own length. Her hull is of mahogany. The Gordon was built by John White, of East Cowes, England, and her engines are by Belliss, of Birmingham. She is of diagonal build, of double thickness, has compound surface condensing engines indicating 150 horse power, of the locomotive type of steel, with pressure of 120lb to the square inch. The Gordon started from the dock pier at 1 o'clock, Captain Thomas, Lieutenant Hely-Hutchinson, and Mr Huysmans, engineer, being the oflicers on board. The trial was a great success. The boat ran from Point Gellibrand to Point Cook at an average speed of 14 knots. She proved her self capable of completing a circle having a diameter of twice her own length in 40 seconds. The official trial will probably take place early next week. The Argus, 9 April 1886