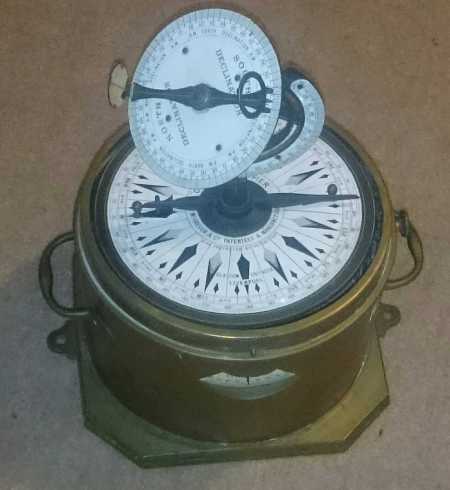 For obvious reasons iron ships created a lot of issues for compasses. While preparing Cerberus to leave the UK for Victoria, Captain Panter discovered that the ship's compasses were incorrect by a massive 66 degrees (between north and east). The compasses were then repositioned on the ship on the 27th of October 1870. Their adjustment by a man from the Admiralty who put in magnets was completed the next day. Captain Panter related how, after leaving Suez, the compasses altered their deviation almosr causing Cerberus to run adrift twice. A clear sky allowed observations of the sun to be made thereby allowing navigation without the compasses until the cause was found, which unfortunately Panter did not explain.

As we believe that the Compass Verifier, said to be from Cerberus, was not manufactured until 1876, it is not the means by which the compasses were adjusted on this occasion.

The McGregor Compass Verifier was claimed by its manufacturer to be "the latest & best invention for ascertaining the compass errors of iron vessels". This Verifier is an 1870s computer which can calculate true and magnetic north.