The 4.7 inch Quick Firing Gun shown below could throw a 45 pound projectile 10,000 yards. The 1893 Navy List shows that two of these guns were fitted to HMVS Nelson. The two 45 cwt guns on Nelson mentioned in The Argus on 10 December 1890 were most likely these 4.7 inch QF guns. 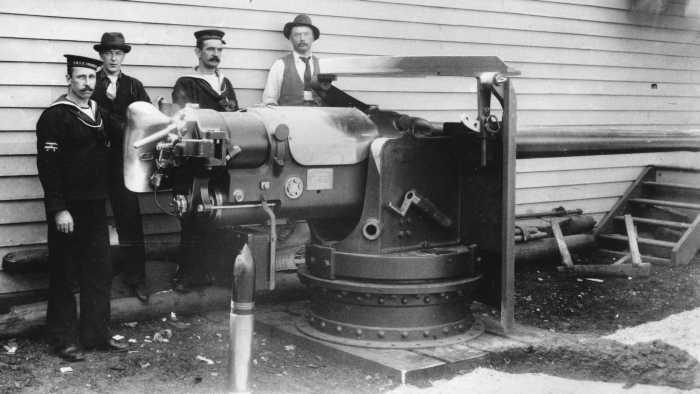 The photo of one of the two 4.7 inch QF guns was most likely taken after Nelson had been decommissioned. The cap tally being worn by A.B. Charles Lay reads HMVS Cerberus. In the foreground is a projectile balancing on top of its cartridge. Photo courtesy of Geoff Dougal.

The type of gun most prominent here — the 4.7 gun - is at present one of the strongest cards in the pack of the Elswick firm, which is greatly enamoured of it, as indeed is our own Government. It is, in fact, the pattern of gun which now forms the main armament of all our first-class cruisers, and it was chiefly designed to repel the attack of torpedo boats. The type found its first success in the fact that the 4.7 45-pounder gun could do in 47 seconds what it took the 5-inch B.L. gun five minutes to perform. It is capable of firing twelve shots a minute; and assuming a war-vessel to be armed with a broad-side of three of these guns, a torpedo boat would run seventy-two chances of being hit in the two minutes she would spend in speeding over the 1,300 yards she would probably need to traverse to begin her attack. By the way, artillerists, it seems, agree that a rate of about ten rounds a minute is sufficient for all guns larger than the 6-pounder; any quicker rate is liable to be obtained at the cost of impaired efficiency in other directions, and carelessness on the part of the crew in loading and aiming. 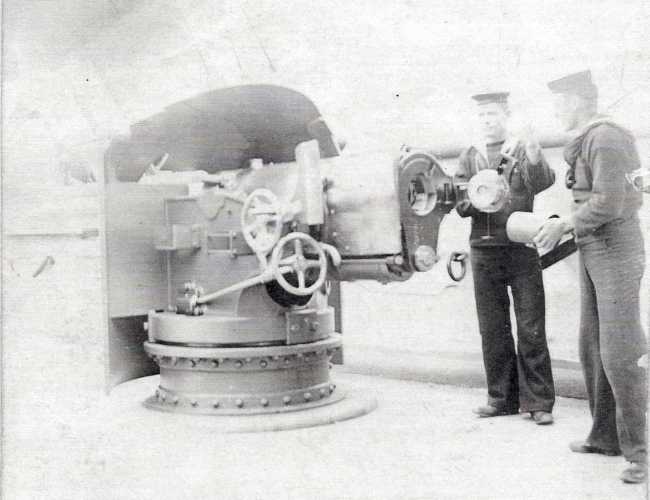 From 1893 the Victorian Forces Lists state that the boats were using two or four barrel one inch Nordenfelt machine guns.

Although it has always been assumed that the 5 barrel Nordenfelts were naval guns they were most likely used in the forts at the entrance to Port Phillip Bay. 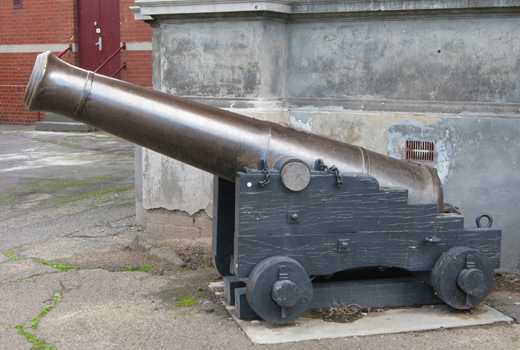 32 Pounder from HMVS Nelson in Kensington

On arrival in Victoria, Nelson carried twenty 32 pounder muzzle loading guns on the main deck. These guns weighed approximately 42 cwt. and were known as Monk Pattern C guns. When Nelson was cut down in 1879 some of these guns were moved to the Upper Deck. The remaining guns were removed from Nelson in late 1885 in favour of six inch breech loading guns. 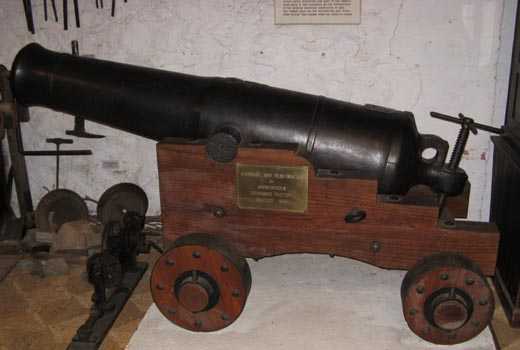 A 25 cwt 32 pounder Smooth Bore Gun
the same as used on board HMCS Victoria.
The gun shown is owned by the Clunes Museum.

* On her arrival HMCS Victoria also carried one 56 cwt 32 pounder smooth bore gun at the bow on a pivot mount.

On 26 May 1866 the Argus newspaper reported that one of the 40 pdr field guns had been mounted on HMCS Victoria as a pivot gun on the upper deck.

The 40 pdr was still mounted on board HMCS Victoria as a pivot gun in November 1867. 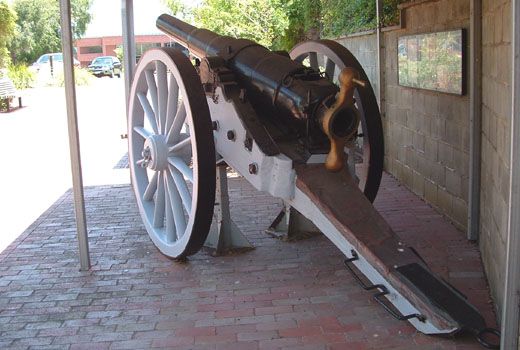 One of the Colony's six Armstrong 40 pounder Rifled
Breech Loading Guns here seen mounted as a Field Gun.
The gun shown is on display at Fort Queenscliff. 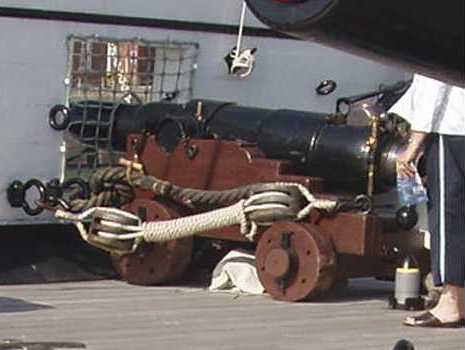 One of HMS Warrior's 40 pounders mounted on a naval carriage
photo courtesy of Rik Shepherd. 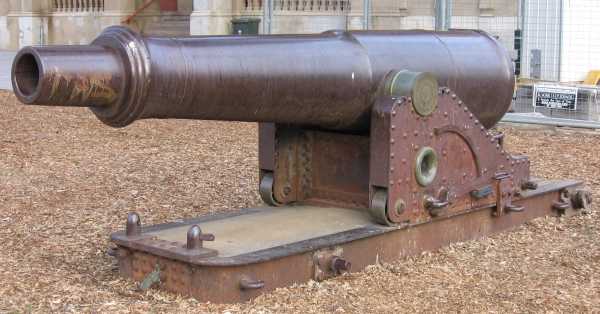 One of the two Bow Chasers at Eaglehawk on a Carriage Slide Mount.

On arrival in Victoria, Nelson carried two 7 inch 6½ ton 158 pounder muzzle loading guns at the bow on the upper deck. Known as Bow Chasers these guns had been converted from 68 pounder Smooth Bore guns using the method developed by William Palliser. The 68 pounder was bored out slightly and a rifled wrought iron tube inserted. These guns are the only two of their kind that we are aware of.

As a result of the palliser conversion the gun now fired various projectiles (see box) weighing between 110 and 158 pounds approximately 3,000 metres. The accuracy was greater and the shell hit targets with much greater force. These converted guns were capable of piercing the armour of ships such as Warrior or Gloire.

In 1883 the guns on Nelson were described thus:- "The latter vessel is obsolete and all of her guns, with the exception of the two named (7-in M.L. Guns), are of such light calibre as to be practically useless."1 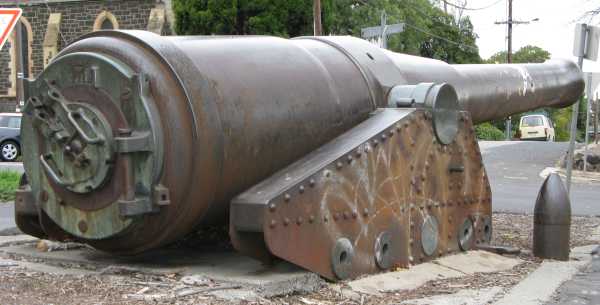 Two of these guns were used in the Victorian Navy. Albert was originally fitted with an 8 inch breech loading gun in 1884 and Victoria had her 25 ton 10 inch BL gun replaced by an 8 inch gun in 1887. 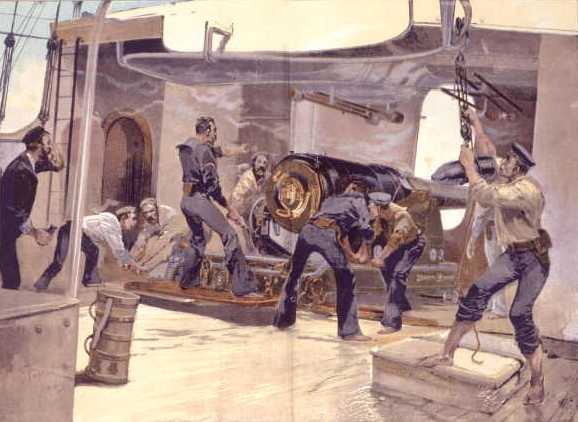 The 8 inch Gun in action on board either Victoria or Albert.
Illustrated Australian News, 9 November 1889.

When the gunboat HMVS Victoria arrived in Victoria in 1884 she carried a 25 ton 10 inch Breech Loading gun. Because of the difficulty in operating this gun it was replaced in 1887 with a 12 ton 8 inch gun of the same type as used in HMVS Albert.

"Her big 25-ton, or l0 inch breech-loading gun, 27ft. 8in. in length, situated, in her bows, naturally was viewed with great attention and interest. The maximum charge for this enormous weapon is 230lb. of powder, but 170lb. is the normal full charge. The weight of the projectile is 4001b. The range of the gun is 10,000 yards, while its projectile will penetrate 20˝ inches of wrought iron armour at 400 yards with a Palliser chilled shot." Australasian Sketcher, 25 August 1884 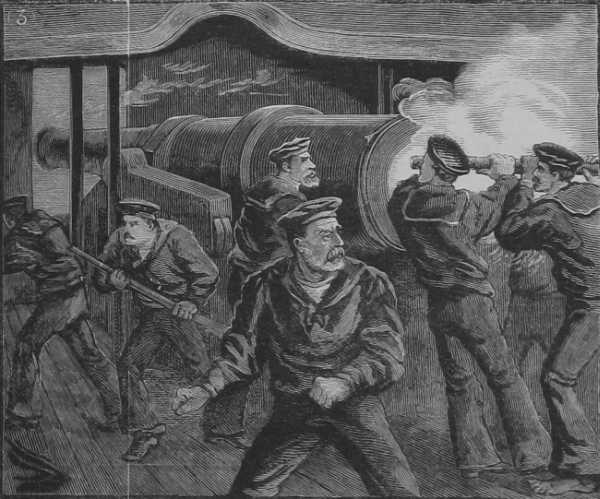 The 25 ton gun in HMVS Victoria in use at night.
Illustrated Australian News, 15 April 1885. courtesy of the Melbourne University Library.

In 1884 HMVS Albert carried two 9 pounder Breech Loading guns on the beam, presumably one each side.2 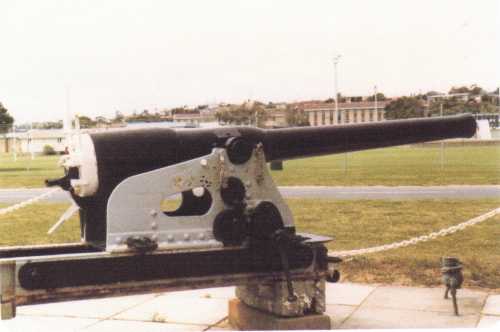 In 1884 HMVS Victoria was reported as carrying two 12 pounder Breech Loading guns at the stern.3 These 12 pounder guns were most likely the 12½ pounder guns. 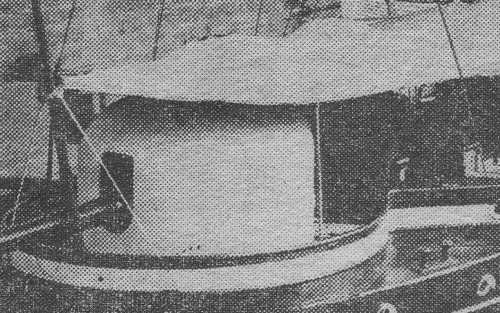 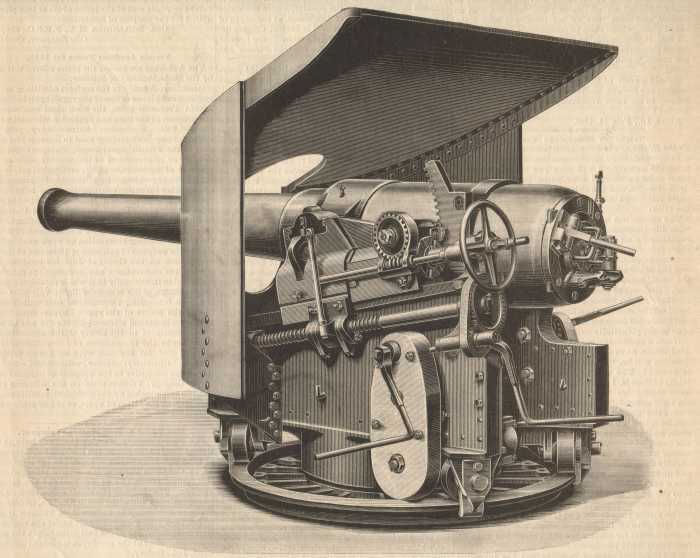 From 1886 until 1892 Childers was listed as carrying two 1½ inch Hotchkiss Guns. From 1893 this description had changed to two 1-pounder Hotchkiss Q.F. Guns. 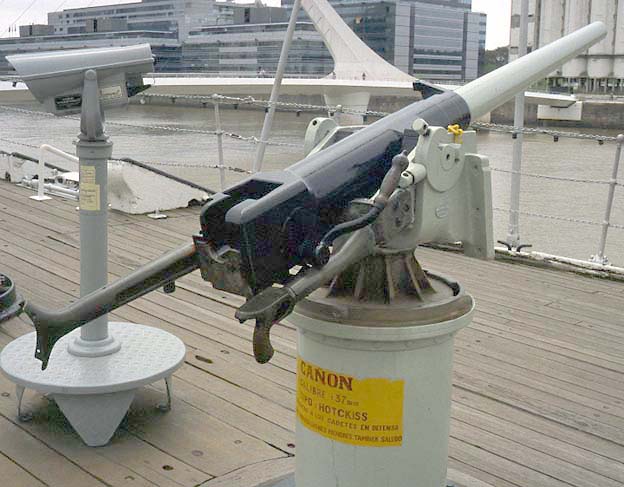