WARNING: "Aboriginal and Torres Strait Islanders are warned that this webpage contains images of persons who are now deceased". 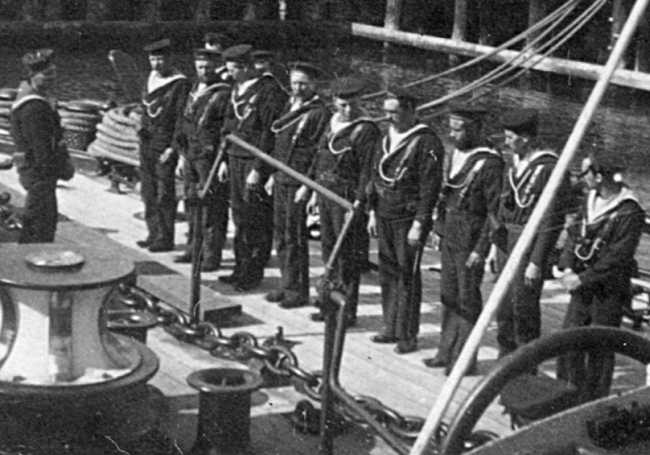 The non-european sailor third from the right is a member of the Naval Brigade.
(The uniform of the Naval Brigade differed from that of the Permanent Forces in having
"white piping on the outside seam of the trousers & white piping on shoulder seams of monkey jackets"5.)
Photo W. R. Grimwade on Saturday 19 September 1896 and used courtesy of University of Melbourne Archives.

Members of the Victorian Naval Forces thought or known to be Non-Europeans.

Although by the 1890's a small black community had formed in Port Melbourne4, it could just be that the higher representation of Port Melbourne residents in the above list, compared with those from Williamstown or the Permanent Force, is simply due to the more detailed Port Melbourne records.

Click to download the Victorian Naval Reserve Register of 40 Possible Non-Europeans.
This is a very large pdf file of 51 mb and takes 7 minutes to download with a 1.5 mbps internet connection.

1 Memo on Harry Moore's claim to have resigned at a later date than he did.
2 The Hobart Mercury, 3 March 1917 and The Argus, 11 June 1921.
3 V.N.R.R. Based on their description in the Victorian Naval Reserve Register as having black or dark complexion and black or dark eyes.
4 "By the 1890s, it appears a small black community had formed in Port Melbourne. Seemingly entirely male, the majority worked at the docks or in other menial labouring jobs." Love is Murder abstract. Provenance, September 2007, Number 6.
5 Victorian Government Gazette, 29 March 1893
6 Sandridge Darkeys The Argus, 6 November 1860
7 "Mr. Kerferd says he is glad to learn that the young man is a native of the colony, for we have evidence that our Victorian youth preserve the courage of our fathers." The Camperdown Chronicle, 13 May 1881


NOTE: No offence is intended by the use of the term Darkey. The word is used simply because it was used by the Non-European who wrote the letter above complaining of racial discrimination.