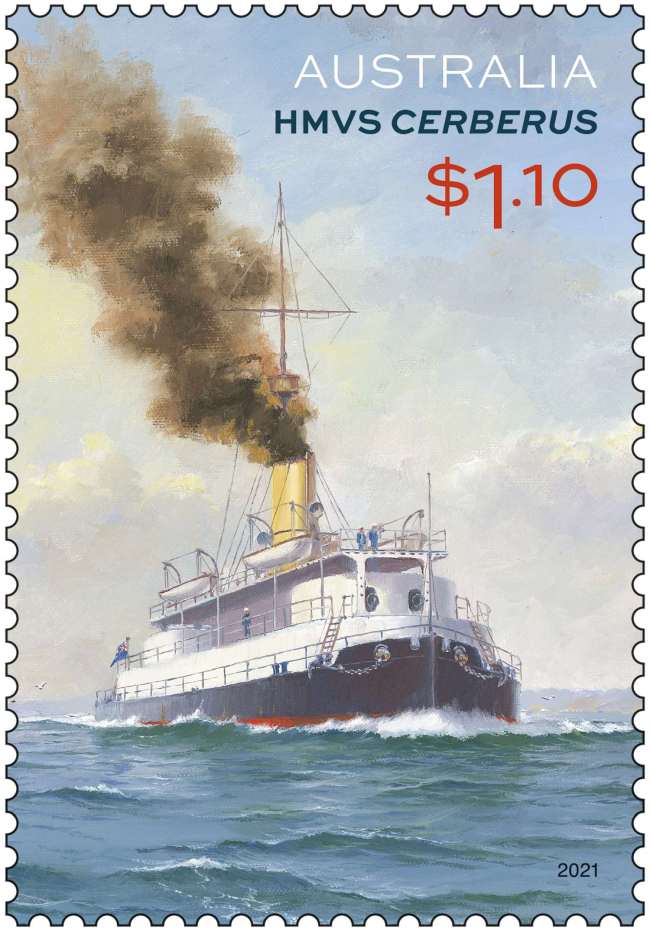 To celebrate the 150th anniversary of the arrival of HMVS Cerberus in Victoria, Australia Post has commissioned a postage stamp. The stamp depicted above shows Cerberus as she appeared in the mid 1880s. Ian Hansen, has done an excellent job, with our input being limited to the direction of the smoke, the height of the fighting top, the colour of the breastwork, the number of boats and the lack of a forward charthouse. I agonised over whether to ask for the Nordenfelt machine guns to be included but decided that they would not be visible on a postage stamp size image.

The painting clearly shows the problem faced by the lookouts in the fighting top as described by the Argus's newspaper correspondent on 31 March 1888 - "There is perhaps only one more undesirable position, [than the stoke hole] & that is to be sent up to the crow's-nest on board the Cerberus when the funnel is belching forth its thick cloud of smoke."

To commemorate the 150th anniversary of the arrival of HMVS Cerberus in Victoria, Friends of the Cerberus has invited representatives of the City of Bayside, the Royal Australian Navy, the National Trust, Heritage Victoria, the Black Rock Yacht Club and the media to a stamp unveiling on Australia Post's release date of the 22nd of March. For a number of reasons committee decided that, rather than the large event undertaken in 2011 to commemorate the 140th anniversary and on two previous occasions, a more intimate event was appropriate.

Below are the HMVS Cerberus stamp products being sold by Australia Post. Should members wish to purchase any of the products, they can be ordered from Australia Post by printing out this order form, or via the link below the product images, and posting it to the relevant address depending on whether you are in Australia or outside Australia. Friends of the Cerberus will not receive a commission on sales. We simply wish to make it easy for those interested to purchase these fantastic items. I will certainly be buying at least one of each. I suspect that I won't be around for the 200th anniversary. Hopefully Cerberus will be. 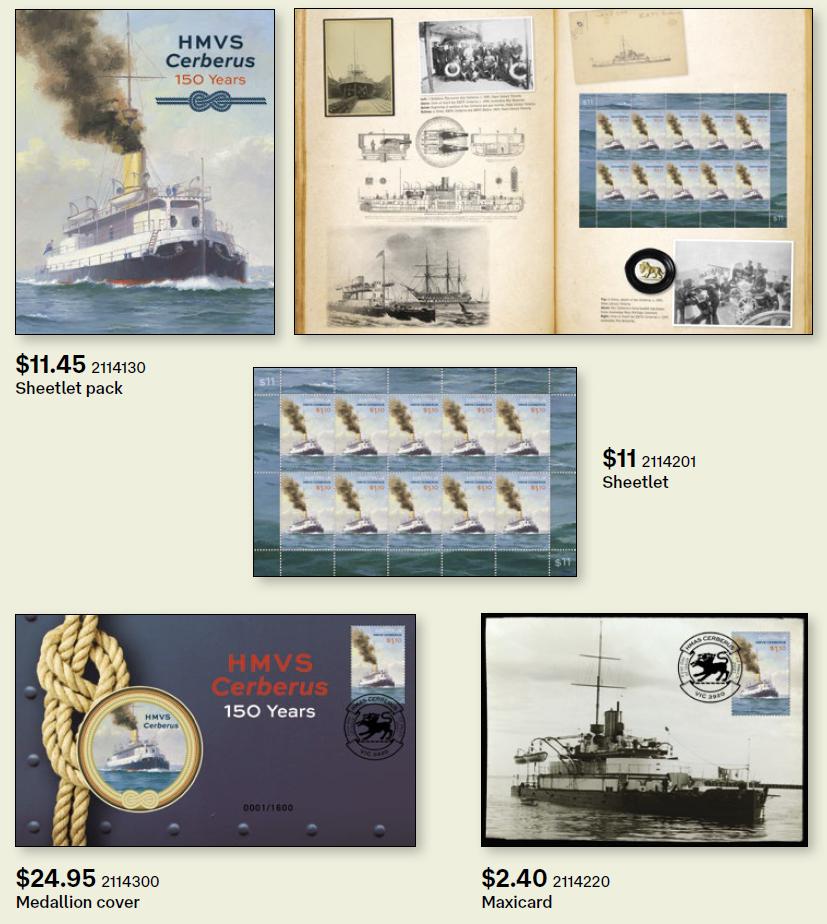 Cerberus to Australia, 150 Years Ago.


To commemorate the voyage of Cerberus to Australia, we are presenting highlights of the voyage, starting from the 150th anniversary of the HMS Captain disaster (7 September 1870) until the 9th of April 1871. The 9th of April 2021 marks 150 years since the arrival of HMVS Cerberus at Melbourne.

At Galle in Ceylon (Sri Lanka) the ship's boilers and engines were cleaned and coal taken on (450 tons according to Engineer Breaks or 325 tons according to Lieutenant Panter). While working on the port engine one of the men, Smith, crushed his fingers. After leaving Galle on February 4, Engineer Breaks noted that the weather was fine and that the engines were turning at 55 rpm which probably meant that Cerberus was going about five knots. The stokers were working in heat of 54.4 degrees Celsius, hopefully with the ventilating fans in operation. On March 17 Cerberus arrived at Batavia (Jakarta, Indonesia) where Smith, whose condition was described as very bad, was one of the men to go ashore with Engineer Breaks in the ship's dingy.

Cerberus left Batavia on February 25 in fine weather but hit a hurricane the next day. The sea was so rough that seventy to eighty tons of coal was washed off the deck and lost overboard. As Cerberus was a harbour guard ship, the coal bunkers were only large enough for operation within Port Phillip where coal was never far away. This meant that when travelling larger distance than Cerberus was designed for, as well as coal being stored in the bunkers, extra storage space such as on deck and in the gun turrets had to be utilised. On February 28 Cerberus was described as unmanageable with the rolling being so severe that life lines had to be rigged in the stokehold. Engineer Breaks himself was feared washed overboard or crushed by a spare topmast that came loose, when he went to replace a bunker cover that the sea had washed away causing water to pour inside the ship. This "very dirty weather" was to continue for two weeks.

The Victorian Navy - of the Colony of Victoria (Chapter 9)

Over the last decade I have been writing a book about the Victorian Navy. Although not yet complete, Friends of the Cerberus has decided to make the book available in installments to our loyal supporters. Each newsletter will provide access to a new chapter in sequence, except for the last chapter.

Chapter 19, which details the campaign to Save the Cerberus, will be distributed when completed. This chapter will describe the 20 year campaign and give credit to those instrumental in advancing our campaign, as well as identifying those responsible for the disastrous decision to fill Cerberus with concrete. Cerberus Heroes and Heritage Vandals. The chapters are listed below. Chapters 17, 18 and 19 are in the process of being written.

As always, comments are most welcome. Chapter 9, Attacking the Forts can now be downloaded.