Medals for the Victorian Naval Forces

"Victoria was the only Colony and State in Australia to provide a Long Service Medal of "strictly local content". All other states had medals mostly identical to the British issue, but with State names on the reverse. These medals were stuck by the Royal Mint in London. In fact NSW did not issue long service medals to its naval forces until 191215. The Victorian medal, with its other differences, was struck in Melbourne by Thomas Stokes.

In 1871 the issue of a Long Service Medal was considered for ten years* effective service, but it was not until 1875 that design and die costs of £150 were presented from England. This price being considered outrageous, samples of the then issued British Long Service Medals were presented to Messrs Stokes and Martin of Melbourne in 1880, who proceded with the design and and die work at a cost of only £25, a considerable difference from the London quotation."1

As royal sanction had not been obtained in time for the presenting of the first batch of medals in 1881, the Govenor relactantly declined to present the medals. To quote David Matthews8 "the first recipients were wearing the medal before Queen Victoria had given her approval for its award, an unusual and daring act in those days." Perhaps this was an indication of the young colony's growing self confidence.

* The original intention of awarding the medal for ten years service changed as, when introduced, the medal was awarded for 15 years of service.

Two types of the Victorian medal were issued with different mottos:-

While some of the type II medals were issued after 1901, gradually the British Medal to Australian Navy replaced the Victorian medal. Obviously those qualifying up to 1915 must have served some time in the Victorian Navy and so the Australian medal is also covered below.

NOTE: The above list is far from complete. Please advise us if you know of names that should be added.

2.45 - Naval Reserve came on board (Cerberus) and stationed went to Quarters action.

2.55 - His Excellency the Governor embarked on board Commissioner. On leaving the shore a salute was fired from Nelson. Arrived on board at 3 and inspected the Quarters went through the different modes of firing and also repelling torpedo boat attack his Excellency left the ship at 4.15 and proceded on board the Nelson to present long service medals to officers and men entitled to them. Officers and Men returned from Nelson at 5.50.

Webmaster: Fortunately the names of those who received the above medals were recorded in the Argus newspaper on 8 September 1884 (below).

Long-service medals were awarded to the following officers and men:—

A general inspection of quarters was made on Sunday morning, after which Commander Tickell distributed long service medals as follows:—

The edge detail of the 1899 medals is not known.

Edge detail on known medals is as follows -

A pleasing ceremony was consummated on board the R.M.V.S.(sic) Cerberus on Wednesday afternoon last, when a number of the blue-jackets of the Victorian Navy were presented with long service medals for having served 15 years, by his Excellency the Lieutenant-Governor, Sir John Madden.

The medal, which is very weighty, bears on one side the Royal effigy, and on the reverse the words "For loyal(sic) service and good conduct." The latter words are stamped on the ring, which also bears the sailor's name and E.R. His Excellency, accompanied by Colonel Campbell, was received on board the flagship about five o'clock by Captain Tickell, Commander Colquhoun, and Paymaster Tracey. The recipients were arranged four deep, and as their names were called, they came forward for their token, and received a hearty shake of the hand from His Excellency. As soon as the distribution terminated, the party went below to the captain's cabin and spent a pleasant twenty minutes, when His Excellency took his departure on the steam tender.

Prayers were read on the quarterdeck (of the Cerberus) by Captain Cresswell today & afterwards the following were presented with "long service & good conduct" medals:-

To qualify for these rewards the recipients must have been in the service for 15 years of continuous "very good character".

.....The medals presented were garnished with a green ribband. On one side the metal award bore at foot the Latin inscription, "Dintryne Fidelis;" [sic] on the obverse a head portrait of the present King, and the lettering, "George V. Brit. In Rex. et Ind. Imp." - Appended are the names and ranks among whom the long-service medals were distributed-:

Over two hundred men of the Victorian Naval Forces also received medals for their service in three campaigns in which members of the Victorian Navy participated. These were the First Taranaki War in New Zealand (1860-1), the Boxer War in China (1899-1901) and the Boer War in South Africa (1899-1902). The New Zealand Medal, China Medal and Queen's South Africa Medal were all British medals. 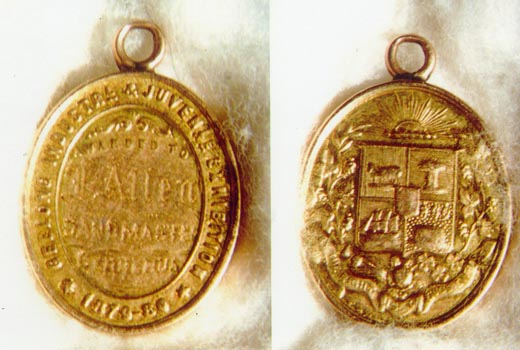