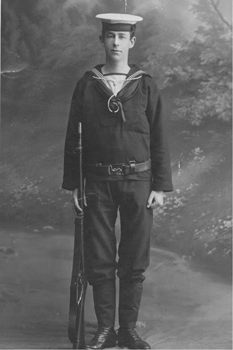 Leading the First World War Veterans in the March,

As a small boy, Richard Stanley Veale, witnessed the departure from Port Melbourne of troops who were destined to take part in the many military conflicts in which became involved.   He saw the Naval Contingent of the Victorian Naval Brigade depart for the China War (Boxer Rebellion), in June, 1900, also the departure of troops for the war in (Boer War), in 1899, 1900 and 1901.   His childhood recollections included watching the crew of the “Cerberus” perform their duties when that ship was close to shore.

Perhaps these events stirred in him the desire to be part of ’s defence force during his adult years, for he joined the Cadet Corps (ANCC) at the old Williamstown Depot on 30th. April, 1909 at the age of 15 years.

As a Naval Cadet he trained aboard the “Cerberus” which was moored alongside Gellibrand Pier, in the corner where the Naval Depot’s northern frontage joined the Gellibrand Pier.

“We cadets used to go aboard the “Cerberus” and drill with the .45 four barrelled Nordenfeldt guns, and a couple of light three pounders that she had.   Occasionally,

we’d drill with the ten inch muzzle-loading guns in her turrets.   We didn’t use a

projectile or charges, but we went through all the motions of the various numbers.

We didn’t actually run the guns out, or run them in, but we did do the ten inch

With the outbreak of World War I, Midshipman Veale joined the Australian Naval and Military Expeditionary Force assigned to take control of the German Colonies north of .   One of their main objectives was to take and occupy a German wireless station in German New Guinea.   On the 11th. September, 1914 the Australian force was landed a little east of the pier on (in the vicinity of Herbertshöhe), and made their way towards the German Wireless Station at Bitapaka, (occupied by 12 Germans and 80 natives).   Incorrect German intelligence information reported that an invading party of 800 men had  landed in to proceed inland to take the wireless station, instead of which only 30 men made up the first attacking party.    On the basis of this incorrect intelligence information, German resistance along the road to the wireless station slowly crumbled, but not before two Australian Officers and four men were killed, and several men wounded.    By on the 11th. September, 1914 the German wireless station was occupied by the Australian force.

“But opposition of a sort was not quite over;  early on the 12th. Bond rounded

up several more natives armed with rifles, and a party sent up from the base under

Midshipman Veale, which reached the station at , encountered a good deal

of harmless sniping on the way.

After consultation with Colonel Holmes, Admiral Patey soon decided that the wireless

station was too isolated and useless to be permanently occupied.   Bond was therefore

ordered to put it completely out of action, and to bring back the instruments with

him.   This was effected by the afternoon of the 12th., and all the landing-parties,

returning at intervals to Kabakaul, were re-embarked on the destroyers and landed at 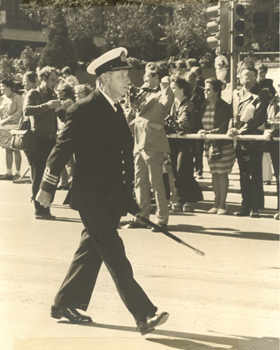 Following his service during World War I (1914 – 1918), Midshipman Veale was appointed to the Royal Australian Naval Reserve (R.A.N.R.) Depot, .   He was demobilised on 31st. December, 1919, after five years and five months mobilised service in the Great War of 1914 – 18; of which one year and two months were on war service overseas.   Richard Stanley Veale returned to his employment with the Metropolitan Gas Company, Melbourne.   He resumed ordinary active R.A.N.R. service in 1920 as the Senior Executive Branch Officer of the R.A.N.R., and continued to train R.A.N.R. Cadets and Reservemen, and in 1922 did active R.A.N.R. duty on Naval Intelligence and Naval organization work.   On the 7th. March,1922 the Governor-General, Lord Forster, issued his Commission as Lieutenant R.A.N.R. with Seniority dated back to 1st. July, 1919.

“When I was appointed Commanding Officer of H.M.A.S. Cerberus III at Port

R.A.N.V.R. Officers of equivalent rank.   Therefore, Navy Office issued to me an

“Appointment” as Lieutenant-Commander, R.A.N.R. “Retired”, with Seniority of

October, 1934 – An Assistant  Organiser of the famous “Naval Pageant” at the

May, 1937 – He commanded the Naval Battalion at the Coronation Review

commemorating the Coronation of King George VI, and was awarded his

Having reached the age of 45 years (the retiring age for Lieutenant-Commanders R.A.N.R.), on 5th. September, 1938 he volunteered to serve in, and was transferred to the Royal Australian Naval Volunteer Reserve (R.A.N.V.R.)   Thus, from being the senior serving (Executive Branch) R.A.N.R. Officer, he became the senior serving R.A.N.V.R. Officer, instead of retiring as an R.A.N.R. Officer.

Lieutenant-Commander R. S. Veale was mobilized for full-time service in World War II on 26th. August, 1939;  eight days before the war commenced on 3rd. September, 1939.   His appointment was:  “Extended Defence Officer () and Chief Examining Officer (Port Phillip)”, which placed him in command of all Patrol Vessels and Mine-sweepers in the Port approaches, and the Examination Service at the entrance to Port Phillip. (5)

At on the morning of Monday, 4th. September, 1939, in his temporary quarters at Fort Queenscliff, Lieutenant-Commander Veale was awakened with the news that a small merchant vessel the “Woniora”, had approached Port Phillip and ignored all signals from the “Akuna” (No. 1 Examination Steamer) to stop to be examined before entering Port Phillip.   Not knowing for sure that the “Woniora” was under its rightful command and acting on the principle that “it is better to be sure than sorry” Lieutenant Commander Veale ordered that a shot be fired across its bow.   This shot (fired at , 4th. September, 1939), was ’s “first shot” in the Second World War.  (6)

On the outbreak of war, all the Naval Reserve Depots in the capital cities had been named “H.M.A.S. Cerberus II to VI.”   Lieutenant-Commander Veale became concerned that the similarity in names may lead to confusion in identification of specific Depots,  therefore he recommended to the Assistant Chief of the Naval Staff, Captain J. Burnett R.A.N., that individual names be given to the Depots.   His suggestion that the Naval Reserve Depot, Port Melbourne (H.M.A.S. Cerberus III), be named “H.M.A.S. Lonsdale” was duly accepted and he became its first Commanding Officer under that name.

After the death of his wife, Myrtle Elvina, on 25th. June, 1940, Lieutenant-Commander R.S. Veale suffered a protracted illness and had to relinquish command of “Lonsdale” on 28th. February, 1941.   On recovery from his illness he was appointed Naval Recruiting Officer, Victoria, in April 1941 on full-time duty.   In addition, he did duty as Duty Staff Officer on the staff of District Naval Officer, Victoria, in conjunction with Lieutenant-Commanders Heriot and Mills.   His duties also included those of Naval Liaison Officer with the Director-General of Manpower at .  (8)

On the entry of Japan into the war in December, 1941 Lieutenant-Commander R.S. Veale was appointed (on 12 January, 1942) Senior Staff Officer and Staff Officer (Operations) on the staff of the Naval Officer-in-Charge, Melbourne who was responsible for the South-eastern Naval Operations area from Cape Jaffa in the west to Cape Howe in the east, and south to the South Pole.  (9)

“For a period of several days in May, 1942 there were 42 American warships,

from battleships down to small auxiliary craft and “yard” mine-sweepers, berthed

in the .   One had to exercise considerable ingenuity to give

them suitable berths alongside piers and wharfs.   …   …   …   Naval District

Master” to my appointment, and on 11th. July, 1945 a Naval Board appointment

amended my duties to also include those of “Staff Officer, Coastal Craft.”  …  …

appointed (on 24th. July, 1945) for duty at Navy Office, Melbourne (with promotion

to the rank of Commander), as Inspector of Naval Recruiting, Chief R.A.N.

Rehabilitation Officer, and R.A.N. Representative on the Commonwealth Re-

Establishment and Re-employment Committee in the Department of Post War

He was demobilised on 12th. January, 1950, after ten years and four months mobilised full time service, and remained on the Active List of the R.A.N.V.R. Officers until he was transferred to the Retired List on 4th. September, 1952, thus completing 43.33 years of Naval Service of which sixteen years had been “full-time”.  (11) 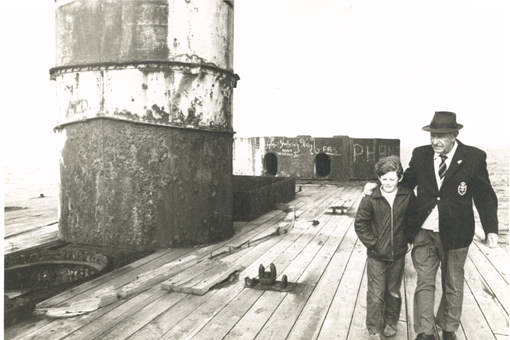 to the Port Naval Reserve Depot, .

On 16th. June, 1979, the Queen appointed Commander R. S. Veale a Companion of The Most Distinguished Order of Michael and St. George (C.M.G.), “For long and outstanding service to the Royal Life Saving Society and to the interests of Ex-Service personnel.”    On the 27th. August, 1980 he was appointed a Life Member of the Naval & Military Club (Melbourne), for many years service as Vice-President and Committeeman.  (12)

Needless to say, after a dynamic career in the Naval Service, and as an Executive Officer with the Metropolitan Gas Company, Melbourne, Commander R. S. Veale and his second wife, Nancy Isabel, did not retire to a quiet suburban existence at their home in , Elwood - they were, on many occasions, guests at celebratory dinners.   Commander R. S. Veale was, on the 25th. April, 1984, a guest of their Excellencies, the Governor-General and Lady Stephen at Government House, , and on the 7th. March, 1986 he and his wife were presented to Her Majesty, Queen Elizabeth II and His Royal Highness Prince Philip.

Richard Stanley Veale, aged 93 years, Navy Commander, of , died at Elwood on the 29th. July, 1987.   The Cause of death was Ischemic Heart Disease – for years.   He was born on 5th. September, 1893 at to Richard Veale, Miner, and his wife Laura Veale, née Sholl.   At 23 years of age Richard Stanley Veale married Myrtle Elvina Homewood in .   At 49 years of age he married Nancy Isabel Townsend at East Kew, Victoria.   His children, in order of birth, were Margaret Elvina, Rhonda Myrtle, Richard John, and Isabel Esther.   Cremation – 3rd. August, 1987 at .   (14)

The above-named member has been mobilized for service by proclamation.   He reported for duty on 2nd. September, 1939.   Rank   Lieutenant Commander.

Approved transfer to R.A.N.V.R. be cancelled and transferred to Retired List, R.A.N.R. to date 5 – 9 – 38 but continuous service as R.A.N.R. Officer mobilized from Retired List.

Appointed to “Cerberus” add. l for duty at N.O. on joining and as Inspector of Naval Recruiting and Staff Officer Rehabilitation on taking over with acting rank of Commander R.A.N.V.R., while holding latter appointment.   To be paid the rate of pay and allowances prescribed in N.F.R. for Commander (on from) whilst acting in that rank to date .   Gaz. 166/45.   409/201/3430.

“Cerberus” III for N.R. Depot, Port Melbourne (on cancellation of transfer to R.A.N.V.R.)

Date of Appointment    Seniority in Rank.

WHERE ATTACHED FOR DUTY.

(Some of the entries recorded in the “Records of Service” were written in pencil          and, as a consequence, have faded and are illegible).

and CMDR John M. Wilkins RFD* RANR Ret’d., for their assistance in the

compilation of this report.

(1)         Autobiographical Recollections of a Naval Reserve Officer by

(3)         Autobiographical Recollections of a Naval Reserve Officer by 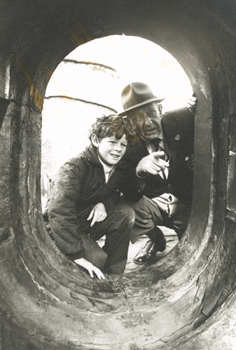 Taken aboard “Cerberus” at ,

Taken aboard “Cerberus” at ,